Vitamin A is one of four fat-soluble vitamins, which are necessary for good health. He has an important role as an antioxidant because he prevents damage of cells by free radicals. Adequate levels are important for good vision and poor night vision is one of the first symptoms of deficiency of this vitamin. He also is necessary for proper function of the immune, skeletal, respiratory and reproductive systems, and also for connective tissue (skin, hair and nails).

Effect of vitamin A

Adequate amounts of vitamin A are undoubtedly necessary for maintaining good health. It is essential for the proper functioning of the retina, where he acts to prevent the night blindness and reduces the risk of macular degeneration, which is the most common cause of blindness in the elderly people. There is some evidence that certain amounts of vitamin A in the form of carotenoids can reduce the risk of certain cancers, heart attack and stroke.

This vitamin also participates in the strengthening of the immune system. It remains unclear whether vitamin A supplements have the same effect as natural intake of this vitamin with nutrition in people who don’t have vitamin A deficiency. Taking vitamin A preparations is not recommended to do without consulting a doctor.

Sources of Vitamin A

There are two main forms of vitamin A:

Retinoids are active forms of vitamin A and is found in animal products like meat, whole milk and eggs. The liver is particularly rich in vitamin A.
Precursors of vitamin A carotenoids, are found in orange vegetables and plants such as sweet potatoes, carrots, spinach, zucchini, cabbage, kale and beets. The highest levels of vitamin A are found in fresh vegetables. Preparing the vegetables by steaming, boiling or frying, frees carotene that he contain. Alpha and beta carotene, as well as some lesser known carotenoids can be converted into vitamin A in the small intestine. This happens when the body needs vitamin A and therefore there is no possibility of an overdose, as is the case with active forms.

Supplements can contain the active form of the vitamin or its precursor.
The active form of vitamin D may be better for those who have trouble converting carotenoids into active vitamin, such as in people older than 55 years who have problems with the absorption of fat.

There are several units for expressing vitamin A activity. Many supplements are labeled with the old IU (international units), although newer and more accurate unit is Retinol Equivalent (RE). The new unit makes a difference in the absorption of retinol and beta carotene. One RE was equivalent to one microgram of retinol or six micrograms beta carotene.

Adults should not take more than 25,000 IU (5000 RE) vitamin A daily in active form, and in pregnant women or those planning to become pregnant limit is 10 000 IU (2000 RE) due to its toxicity to the fetus. The best way to intake of vitamin A is through diet, but in cases of nutritional deficiency it requires supplementation. Better to use carotenoids as supplements than retinoids, to avoid toxic effects. Intake of foods rich in carotenoids is beneficial in reducing the risk of cancer, heart infarction and strokes.

Deficiency of vitamin A

Low levels of vitamin A which could cause symptoms of deficiency are particularly uncommon in people from the developed world who are in good health.

Symptoms resulting from vitamin A deficiency include:

Usually this symptom appears after long-term deficiency. Lack of vitamin A is more likely to occur in people who are malnourished, the alcoholics, the chronically ill, and those with impaired absorption of fat. Another group of people at increased risk of vitamin A deficiency are patients with type 1 diabetes, in whom the disease is not well controlled. People with normal health and diet have a significant reserve of vitamin A.

In poor countries and developing countries where nutritional status is poor and the lack of vitamin A is common, it is found that supplements of vitamin A reduced the mortality rate in children who suffer from a number of different viral infections.

Risk factors for deficiency of vitamin A

Overdose can occur when taking large doses of the active form of the vitamin. Larger quantities that won’t be will be used by the body are stored in the liver and in fatty tissues.

Symptoms of these conditions of hypervitaminosis are:

Effect of vitamin A, Sources of Vitamin A, Vitamin A 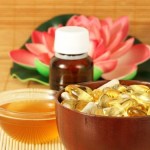 « Tomato – A Powerful Guardian Of Our Health
Kids and sports »